You are a radio reporter in a maritime city where shipbuilding is a major source of employment and wealth.

The local shipyard has announced 800 job losses on top of 800 announced a few months earlier.

In an effort to save their jobs, 37 workers decide to occupy a gas accommodation platform and a frigate, which are moored in the river adjacent to the shipyard.

Their protest has been going on for almost 14 weeks. Police and pickets surround the gates of the yard and the ramps leading to the occupied vessels.

For more than three months local media has received news releases and statements from the shipyard management, politicians, and from the union representing the occupying workers – but nobody has heard directly from the workers taking the action.

The only contact with them is via handwritten notes which are smuggled off one of the vessels, the gas accommodation platform, by messengers who, under the cover of darkness, dodge the police lines and use ropes to swing over barbed fencing and across the water between the accommodation platform and the shore, and then scramble aboard with the help of the occupying workers.

One morning, speaking live on your radio station, the union representative claims that management has turned off the water supply in an effort to end the occupation.

The representative says conditions on the occupied accommodation platform are bad and that some of the occupying workers are unwell. Their families express concern on your radio station’s morning phone-in. Many are distressed.

You have been reporting events since the start, and one obvious angle not yet covered is what life is like on the occupied platform. You have heard second-hand, but feel it’s important that you see for yourself the living conditions of the striking workers so that you can report the situation accurately.

Your news editor agrees, and it’s decided that you should try to board and interview the men. You know you will be trespassing, and could face legal action, but you go ahead anyway.

After broadcasting your report, the radio station receives a letter of protest from the lawyers representing the shipyard, warning against any further attempt to gain access to the vessel and interview the occupying workers. 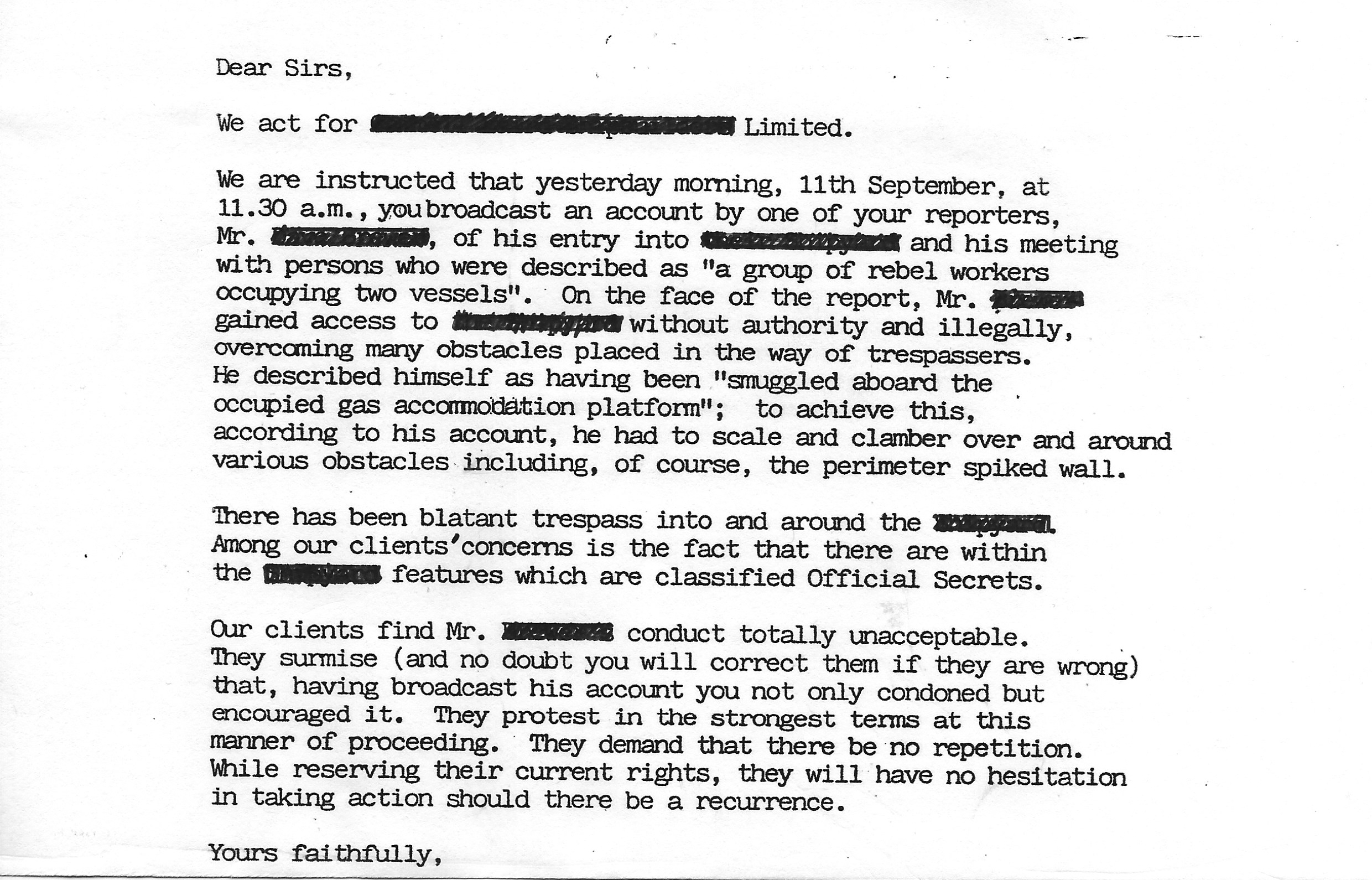 As journalists we will frequently face obstacles when news-gathering.

Public relations and communications officers will always be happy to feed you the side of the story that suits their needs. This is their job.

However, it is not always that easy to explore, understand, and articulate those elements of the story that are hidden behind legal barriers.

And, without all the facts, it’s difficult to relay a complete version of events to your audience.

Journalists need to be able to paint the fullest picture possible of what is really happening, without putting themselves, or those they are interviewing, in harm’s way.

In this particular case the decision to trespass in order to talk to the occupying workers face-to-face, and to see first-hand the conditions they were living under, was taken on editorial grounds after careful consideration by senior editorial staff.

Together, they decided the risk of arrest for trespass was worth taking in return for hearing a perspective on a major local news story that, for 14 weeks, had not been told.

One major consideration was whether scrambling on to the occupied rig to hear from the occupying workers was in the public interest.

So it’s important always to refer up to your line manager in all cases where you feel you need to take actions that could be legally dangerous.

Your line manager will need to decide whether the information you hope to gather is in the public interest, and your organisation’s legal team will assess the risk to you and to the company.