A JOURNALIST’S GUIDE TO THE USE OF ENGLISH 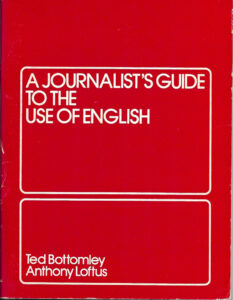 In 1971, the Wolverhampton Express and Star published a staff training book. It was written by two of its journalists, Ted Bottomley and Anthony Loftus.

It was intended to be a writing guide for the newspaper group’s journalists. Over the years there were several revisions.

In 2019 and 2020, almost 50 years after the book was first published, Ted Bottomley’s son, John, also a journalist, took on to revise the journalism training tips contained in the book and make them available for an online audience via this site.

The material has been reproduced on Media Helping Media with the permission of the Express and Star group.

We have added Creative Commons images to the revised chapter. The list of chapters is below.

Why the book was originally written

Much of the following text has been scanned from the original book.

Ted Bottomley and Anthony Loftus wrote A Journalist’s Guide to the Use of English to meet the needs of their own news organisation, but after many requests the work was published for the benefit of a wider audience.

Although written by journalists, for journalists, the guide makes no attempt to teach “newspaper English”, since the authors state: “There is no such thing as newspaper English; there is good English and bad English, and a variety of styles, which may be suitable in different contexts.”

They believe that while style cannot be taught it can be learned by those prepared to work at it and they analyse the elements of good style by using examples of good journalism. Thus the writer is encouraged to develop their skills so that they may be placed firmly at the service of the readers.

English is here shown to be “a bridge between one mind and another; the means of sharing ideas and information”. The craft of constructing that bridge is dealt with in the section on Syntax, which does not claim to be a complete Grammar but which concentrates on common faults.

In his foreword to the book, Harold Evans, the then Editor of The Sunday Times wrote:

“If only every trainee reporter would read and practise what Bottomley and Loftus say, the lives of subs and editors would be transformed. So would the quality of our newspapers.”

Tom Hopkinson, former Director of Journalism Studies at University College, Cardiff, in his foreword has this to say on ‘the question of mastering the art of writing good English:

“The task, I have found, is more than lifelong. However with a qood start and determination we can all go a long way. This book gives any reader a good start. It is what it claims to be, a real Journalist’s Guide.”

In their preface to the book the authors wrote:

‘A JOURNALIST’S GUIDE TO THE USE OF ENGLISH’ first appeared several years ago as ‘Nuts and Bolts of English Usage’. It was originally written as an in-company manual for use on a training course for sub-editors and later revised for the training of junior reporters.

Further training notes formed the basis for another revision in July 1971, when the current work appeared as ‘A Journalist’s Handbook on the Use of English’ – again as an in-company manual. Its defined purpose was to “help journalists to become more effective communicators by giving general guidance on good writing habits”. Since it appeared it has been much in demand by journalists and by training colleagues – from both within the newspaper industry and outside it.

Because of this interest we decided to give it a wider audience, and it is now offered with minor revisions and under its new title to all who have to communicate by means of the written word. It is hoped that all who read it will derive some benefit and as a result will be better able to place their own gifts at the service of their readers.

We wish to thank the Director of the National Council for the Training of Journalists for permission to reprint Notes on Spelling by “Dr. Syntax” from THE PRACTICE OF JOURNALISM.

We also wish to thank the proprietors of the EXPRESS & STAR for making this publication possible and to acknowledge the help of senior editorial colleagues in its preparation.

Ted Bottomley and Anthony Loftus were both journalists and training managers at the Express & Star group of newspapers in the UK.

Ted Bottomley spent his whole working life in newspapers and more than 25 years in journalism. He was a former weekly newspaper editor, and had a long association with the National Council for the Training of Journalists. He was a member of the Publishing and Editorial Training Committee of the Printing & Publishing Industry Training Board. In the UK journalists still compete to try to win the prestigious ‘Ted Bottomley Award’.

Anthony Loftus was a high court reporter and film and music critic before becoming the Editorial Training Officer of the Express & Star group. He was a member of the Institution of Training Officers and the Association of Lecturers in Journalism, and the chair of the West Midlands Regional Training Committee of the National Council for the Training of Journalists.