Journalism is about far more than simply gathering information and passing it on. An essential part of the editorial process is to examine everything we are told to make sure it is factual, and then add context so that any facts that are uncovered are considered alongside existing knowledge.

The author skyfishgoo wrote in a piece about critical thinking that “science and journalism both seek to put facts in context so they become useful to others”. He goes on to say that “science dictates that when a claim is made it is subject to critical review”.

Put simply, he says that all of us have a responsibility to give every new piece of information that comes our way “a bit of a scrub” before passing it on to others.

This is particularly important in terms of producing original journalism and then broadcasting or publishing that material and sharing it on social media.

But let’s first agree what is meant by the word ‘fact’.

According to the Oxford English Dictionary, a fact is something that is “known or proved to be true”. It is also “information used as evidence or as part of a report or news article”. In legal terms, a fact is “the truth about events as opposed to interpretation”.

And that last definition is interesting, because journalists ‘interpret’ events by adding context – but more on that later. For now, let’s refer to facts that have not yet been fully tested as ‘claims’.

Here are a few tests that should be applied to information that a journalist receives from someone who ‘claims’ that what they are passing on is factual.

The first three tests are about source verification and fact-checking, the fourth is about adding context.

1: Is the source credible?

To Do: Research the background of the source, their connections, any previous record of sharing information.

To Do: Research the chronology of events. Check your own news organisations archive. Search the web.

3: Where is the evidence?

To Do: Seek out a second, independent and trusted source.

To Do: Paint the bigger picture, understand the importance of the event in relation to other news stories.

Those of you who are new to journalism might want to print out the following checklist and put it on the wall in your newsroom as a reminder. 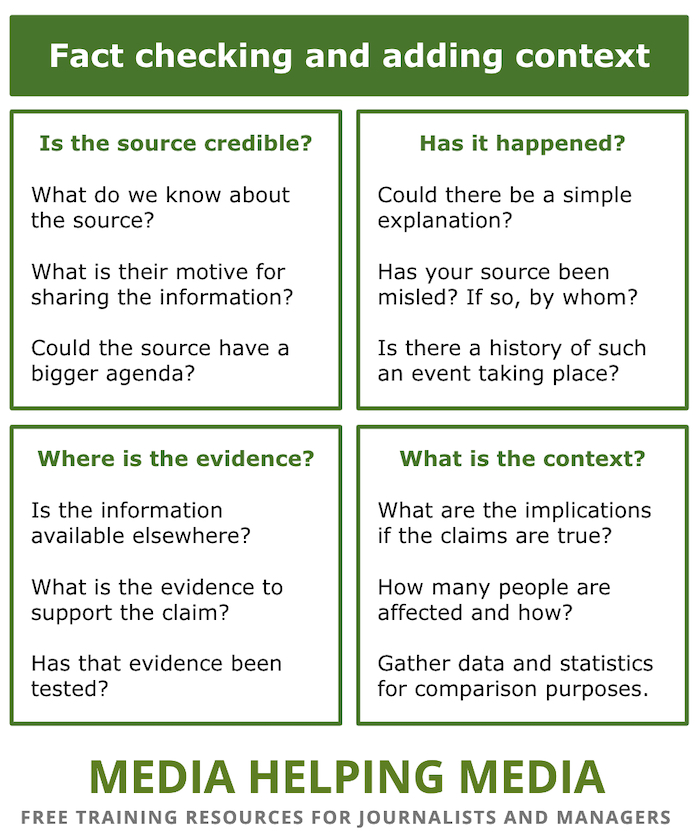 If the results of your research make you feel uneasy you might want to drop the story. However, even a false claim, presented as fact, but, on investigation, found to be untrue, could still be a story. It could point to a political, commercial, or social conflict that might require investigation.

Never rule out a possible news story because the initial evidence presented proves to be shaky.

One dictionary definition of ‘context’ is: “the circumstances that form the setting for an event, statement, or idea, and in terms of which it can be fully understood.”

That word, ‘understood’, is important.

The role of a journalist is to enhance understanding. We do that by surrounding proven facts with data, statistics, history, and circumstances that, together, help paint a fuller picture of what has happened.

Think of it this way.

Imagine you are at home watching a series on TV. It’s the final episode of six. Just as the programme is reaching the conclusion there is a knock at the door. It’s a friend you haven’t seen for some time. You welcome them in.

As they walk through the door there is a scream from the lounge. One of the characters in the TV series has discovered the gruesome remains of a body. Your guest is shocked, but fascinated.

You offer to turn the TV off so you can chat, but they are so intrigued by what they saw on the screen that they ask you whether they could watch the programme with you, particularly as it’s reaching its conclusion. They want to know what happens next.

So you pause the programme, put the kettle on, make a cup of tea, and tell your guest about what has happened so far.

You explain who the characters are, what has taken place in previous episodes, how the situation has developed, the relationships between the characters, what clues you have picked up along the way, and how the plot has thickened to reach the point where your guest heard the scream.

And explaining the background proves to be important because your friend thought you must be watching a murder mystery, when, in fact, the series you were watching was a documentary about archeology. The scream was from an archeologist who had unexpectedly found mummified remains. It was not a modern-day crime thriller.

Now your guest has the context, so you can watch the end of the final episode together, with your guest informed about the background to the story and better able to understand events.

The same is true with journalism.

A colleague who was working as an intake editor on a news desk remembers receiving a call from an off-duty reporter who had just passed an overturned red double decker bus on  a London street. People were wandering around with blood pouring from wounds. Two camera crews were mobilised, but before they’d even left the building the reporter discovered that it was a film crew making a movie. The story had changed once the reporter had checked his facts and explored the context.

I made a similar mistake when reporting on a fire at an inner city block of flats in Liverpool. I reported live into the 4pm news bulletin saying that residents were trying to salvage what they could from their burning homes. I was wrong. Had I checked my facts, not made assumptions, and taken time to establish the context of events I would have discovered that I was witnessing rioting and looting. You can read about that experience and the lessons learnt here.

The challenge all journalists face is not just to report the news but to also set out the background to an event as well as all related events in order to help the audience understand the elements of a story which they might otherwise find hard to comprehend – or even reach the wrong conclusion.

Perhaps it involves researching and setting out the chronology of events that have led to the current breaking news story. These can be presented as related stories.

You might need to research the backgrounds of the characters involved as you look for any social connections to anyone else involved. These can be presented as profiles.

Essentially, what you are doing is gathering as much information as possible in order to put together the most detailed, in-depth, and informative account of what has happened.

All this illustrates that journalism helps people make sense of the world – not just what’s happening, but why it’s happening. Stories that raise questions without even attempting to address those questions are weak stories.

If you found this interesting and, perhaps, helpful, you might want to check our other, related training modules.