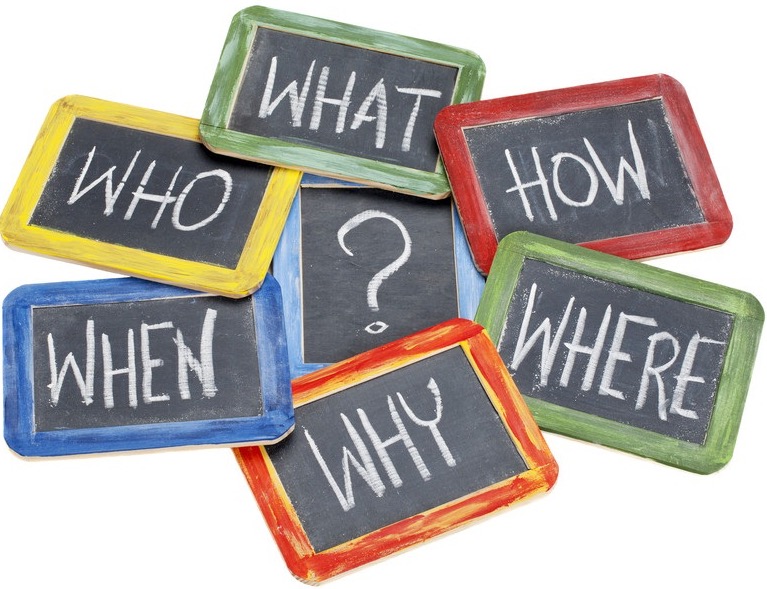 In this lesson we look at the questions a journalists should consider asking.

The six questions are What? Why? When? How? Where? and Who?

And it’s worth asking yourself these questions to ensure you have not missed out anything which ought to be included in your story.

You don’t have to answer all six questions.

There might be times when you choose leave out one or more of them. That’s fine, as long as you have made a conscious decision to do so.

But use the six as a checklist. Run through them as a matter of routine to assure yourself that you have not omitted anything by mistake.

Usually, the two most important questions are who? and what?.

News is often about people doing things (or sometimes not doing things) so the who and the what are frequently the most crucial parts of your story.

How much other detail you include is down to your news judgement and the time and space available to you.

But never try to answer all six questions in your opening sentence or paragraph.

It will result in a cluttered report and leave you with little else to write about.

“A climate change protester, John Smith, today drove the wrong way down the M6 motorway in Birmingham in a protest against the building of a new runway at Heathrow airport.”

All six questions have been mentioned, but the sentence isn’t elegant or interesting.

Ration your information. Use it sparingly and to good effect. Try to keep your audience interested.

In this case, the what is more interesting than the identity of the who, so something like this would have more impact:

“A climate change protester caused mayhem today by deliberately driving the wrong way down a motorway.”

There are lots of other ways of writing this story, but however you choose to start, the other details can be incorporated into the next two or three sentences.

In the next lesson we look at story construction.

This lesson is based on an article written by John Allen. The image at the top is licensed through Can Stock Photo Inc / PixelsAway in accordance with the End User License Agreement (c) – License # 1397576 and released under Creative Commons BY-NC-SA 4.0.

Where does news come from?